RUSSIAN ELEGANCE: Country & City Fashion from the 15th to the Early 20th Century

In the beginning of the 18th century Russia experienced abrupt political, economic and social changes, implemented by Peter the Great’s steady hand. Among his many reforms, Peter promoted social modernization by requiring courtiers, state officials and the military to shave their beards and wear European dress. “Thanks” to him, from 1700 up until the present time European fashion has been considered superior to Russian.

But it doesn’t mean that Russians would suddenly give up their cultural heritage. Peasants, priests and later small merchants and petty bourgeoisie were still wearing traditional dress, and as we read through the book, we see how these two types of costume coexisted and influenced each other.

Russian Elegance, written by renowned experts in the field, provides an extensive overview of clothing and accessories worn by various social classes in Russia from the 15th to the early 20th century. The reader will find out when, where and how each item was meant to be worn. Also covered in this book are different types of fabrics, embroidery and lace, textile production, hairstyles. All items come from the vast collection of about 400 000 objects of the State Historical Museum in Moscow.

The first part of the book, in which traditional Russian dress is described, is a true feast for the eyes. While Orthodox clergy’s vestments are the most sumptuous examples with all its gold and silver embroidery, peasant dress is just as colorful and lavishly decorated. It is very interesting to track the changes Russian national costume went through due to the influence from Paris-inspired fashions worn by high society. 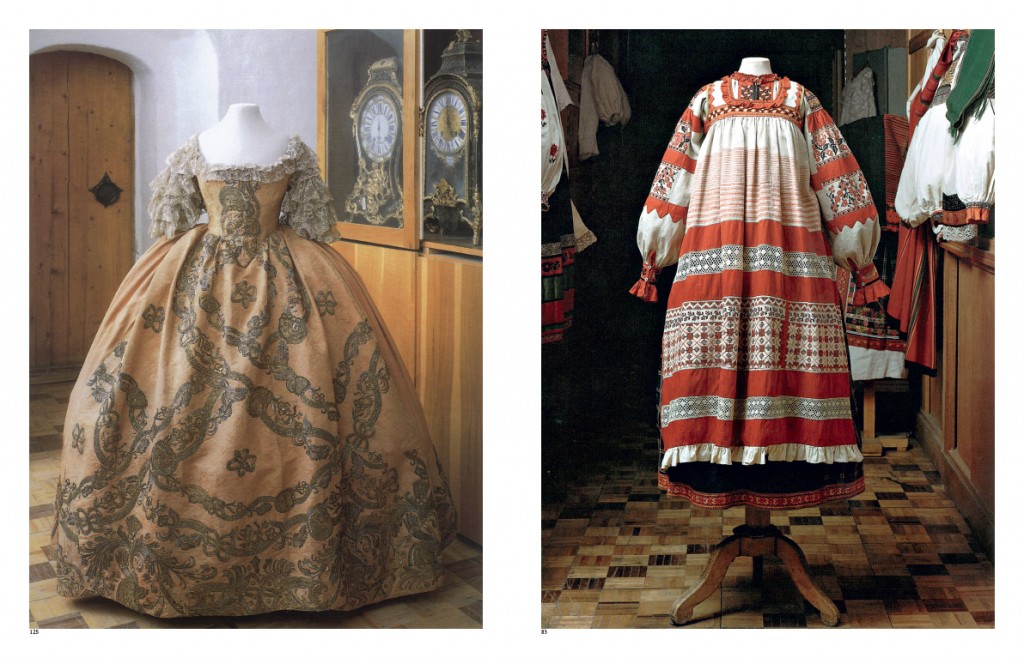 Images are courtesy of Vivays Publishing

The second part of the book elaborates on post-Petrine urban costume, beginning with Peter’s own clothing. Although it is not in the scope of this book to list all clothing types and variations, examples range from court dresses to garments worn by factory workers.

Illustrations alone would be enough reason for me to buy this book. Whatever the state of digital technology is right now, nothing can beat the physical book and printed pictures. They just seem to be more… real. Over two hundred color illustrations present items so rich in detailing, patterns and embroidery that each picture deserves to be studied with a magnifying glass, especially if we remember that in old times embroidered or lacework garments could literally take years to make.

The book is very informative as well as it is a great source of inspiration. Whether you are a fashion designer, a costume historian or simply a book lover, Russian Elegance will be a valuable addition to your collection.

Vivays Publishing has more fascinating books! Check them out: vivays-publishing.com